Dogecoin DOGE/USD is trading for $0.05979, a 1.28% gain in the past day and 0.75 % in the last week. The uptick could be due to Dogechain, a smart contract platform inspired by the canine-themed token.

Dogechain DC/USD is up 25% in the past day and 200% in the last week. DC, though distinct from Dogecoin, could also be behind DOGE trading volumes. The volumes increased 37% to $216,705,178 in the period. Elsewhere, although the excitement around Dogecoin seems to have died, Elon Musk’s Twitter deal could revive the blockchain.

The takeover bid, which has been marred with legal tussles, is expected to rejuvenate DOGE. Earlier in the undertaking, Musk had hinted at the possibility of using DOGE in Twitter transactions.

Lastly, the Dogecoin mining hash rate is up again. It peaked at a seven-month high last week. The metric, which is the computing power for minting crypto, was reported at 815 TH/s, according to Coinwarz. The trajectory is poised to pump the price of the digital asset. Besides the positive sentiment, DOGE is at the lower end of consolidation.

Doge holds onto support amid consolidation 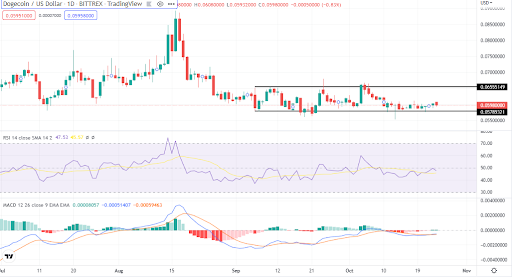 From the daily chart above, DOGE/USD has bounced off the support but remains in a consolidation. The pattern of a high of $0.065 and a low of $0.0.0578 has remained so since September 6. The speed and price change momentum indicator, RSI, is close to the neutral level at 46. Similarly, the MACD shows a weak signal, almost close to neutral.

Despite the meme token holding on to the support, there is a minimal chance of a bullish reversal. The key indicators support the argument – all show a low momentum. The sentiment can, however, change at any price above the resistance. Even so, the momentum indicators should turn bullish to welcome any buy entry.

Where to buy DOGE

eToro offers a wide range of cryptos, such as Bitcoin, XRP and others, alongside crypto/fiat and crypto/crypto pairs. eToro users can connect with, learn from, and copy or get copied by other users.

Ethereum (ETH/USD) eyes a break below a yearly low. A price of below $1,000 beckons

You have not selected any currency to display
Full Marketcap List

You may have missed